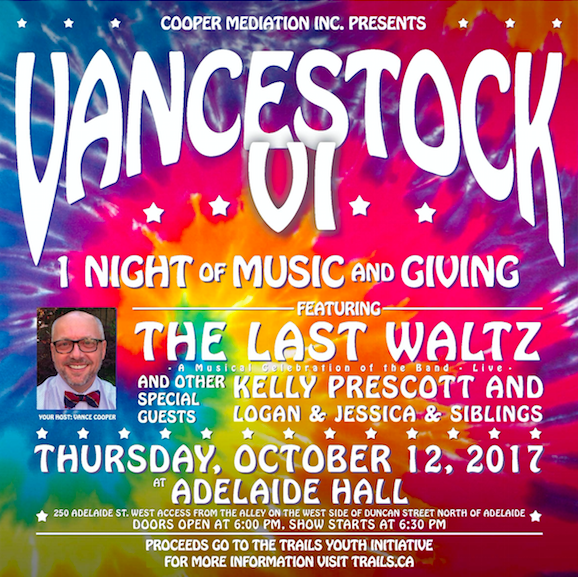 If you happen to see Vance Cooper on the street flashing a big smile and humming a tune, it’s a good bet that he’s reliving one of the wonderful memories he took away from Vancestock VI.

On October 12, 2017, Cooper Mediation Inc.’s sixth annual charity event in support of Trails Youth Initiatives had Toronto’s Adelaide Hall buzzing with excitement and filled with the sound of such talented live musical acts as Logan and Jessica and Jacob joined by Harrison and Jonathan [the group now and forever more known as Sisters & Brothers] for a rocking set culminating with Folsom Prison Blues. Kelly Prescott raised the bar with her unique blend of country, rock and pop. Hats off to Kelly, her awesome guitar player Chad, the incomparable fiddle player Lindsay and the rest of the band. Lance Anderson’s presentation of The Band’s Last Waltz featuring some 13+ musicians was spectacular. A packed house filled the venue in support of the Trails Youth Initiatives.

Together we raised an outstanding $43,412 – enough to fund spaces for four children at Trails’ camp for two weeks during the summer and one weekend monthly during the school year. Welcoming at risk youth from the inner city of Toronto to a camp facility in the Newmarket area, this organization provides a place where they can develop their confidence and self-esteem so as to make good life decisions. Ninety per cent of the youth who complete this program go on to post-secondary education compared to just 10 per cent of their peer group. After six Vancestocks, we have raised more than $197,000 for this very worthwhile cause.

Vance’s love for live music and passion for promoting the work of Trails has made this event one that he and his family look forward to every year. When asked about how he felt after Vancestock VI, Vance said:

I am unabashedly biased but I have heard it from enough people to believe it may be true – this year was the best Vancestock ever. The Adelaide Hall was an amazing venue perfectly suited to music and motivated fun seekers. As for the latter, there were plenty of you for which Trails and I were very grateful.

Is there any way we can top this year’s event? It will be difficult, but we certainly love a challenge and we are eagerly already planning next year’s event. Mark your calendars and PDAs – Vancestock VII will take place on Thursday, October 11, 2018 at the Adelaide Hall. Please note this is the Thursday that follows Thanksgiving.

If you haven’t already done so, there’s still time to donate to this worthy cause, click here to donate to Trails Youth Initiatives. 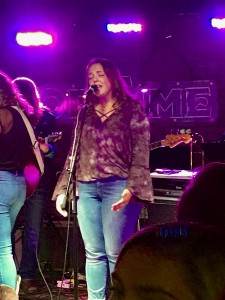 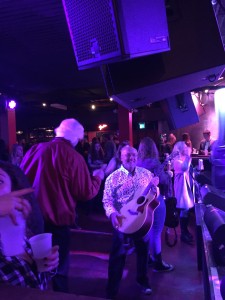 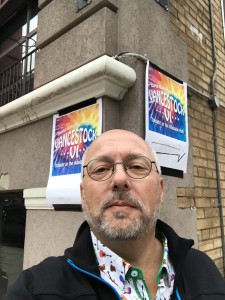 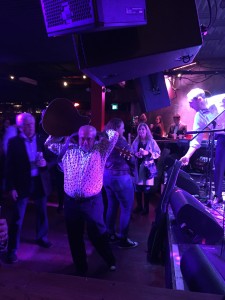