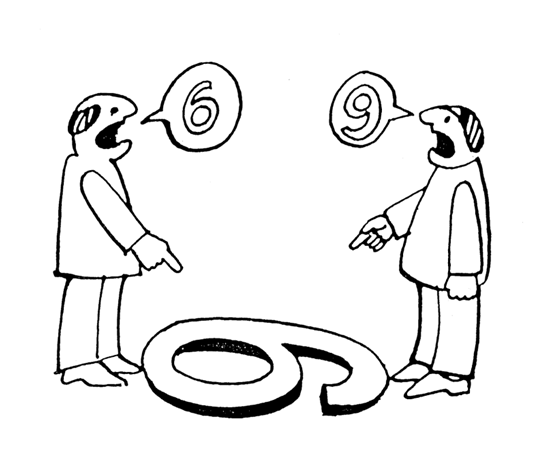 Posted at 09:32h in Mediation, Mediators, Vance Cooper by Admin

There’s a comic drawing making the rounds on the Internet that makes an interesting statement or observation about conflict. It shows two people, who have approached a number from different directions, beginning to argue. One observes a “6”. The other observes a “9”.

The original comic notes that both are technically right from their own perspective. A revised version of the comic reminds us that someone had to write that number in the first place. Did they mean it to be a “6” or a “9”? Perhaps there are other numbers around that could help confirm the intended orientation of the number. Maybe a little research could help clear up one person’s misconception or misunderstanding of what they are seeing. Perhaps they could simply ask if their assumption about the number in question is correct.

As a mediator, I like to remind people that there can be more than one right answer to a problem – it’s what often helps us find areas of agreement. But misconceptions and misunderstandings can contribute significantly to conflict and leave people feeling wronged. By taking time to ensure everyone understands each other and the process, you can save time and frustration by preventing additional conflict.

An Empirical Study on Misconceptions

Misconceptions are generally perceived to be one of the roots of conflicts. Recently, an assistant professor of conflict management at Abdullah Gul University produced a study that provided some empirical data to support this belief. Harika Süklün organized two case studies in which she divided a government office into four divisions (an in-group and three out-groups). She gathered information from the in-group about their perceptions of existing conflicts and then questioned the out-groups to determine if any misconceptions existed. Identifying six misconceptions from 16 statements, she discovered these false understandings were leading to a “we versus them” mentality that was creating internal conflict and a troubled work environment.

Although this was a workplace study, the findings are useful when thinking about other conflicts, including ones we tend to see at mediation. Conflict, in and of itself, should not always be considered negative – it can be quite useful to prompt people to come up with creative solutions to problems. However, if conflict is based on misunderstanding, the parties present will find it difficult, if not impossible, to identify solutions. If you think of conflict as if you and another party were on different pages, conflict based on misunderstanding is like being on different pages, in different books, on different bookshelves, in different libraries.

Communication is absolutely key to productive mediations and opportunities to come to mutually agreeable solutions or settlements. To prevent misunderstandings from becoming insurmountable obstacles, here are a few tips:

-Words matter, but so does non-verbal communication. Is an opposing party indicating they are confused by what you are saying or does their physical reaction seem unexpected? If possible, ask them if they would like clarification or try to make your point in another way.

-Repeat what you hear using your own words. “Just to make sure I understand, you are saying that…”

-Be aware of personal biases and filters that may affect your perception or the perception of others.

-Understand that passive hearing is different from active listening. In situations where important messages are being communicated, it’s essential to remain focused and in tune.

-Ask for an independent third party to summarize issues or positions. A mediator may recognize that one or more parties are operating under a misunderstanding. An opposing party may be more receptive to a mediator offering to explain than someone viewed as an opponent.

Mediation occurs when there is a conflict of some kind that the parties are hoping to resolve. Whether resolution materializes at the mediation, later in the litigation or with judgment in court is largely a function of how the parties work together and understand each other and the issues at play. Take time to ensure that even if you’re not on the same page as an opponent, at least you’re reading from the same book.