Jonathan T. Cooper Inducted To The Ontario Chapter Of The Canadian Academy Of Distinguished Neutrals

25 Jan Jonathan T. Cooper Inducted To The Ontario Chapter Of The Canadian Academy Of Distinguished Neutrals

Posted at 10:49h in Jon Cooper, Mediators by Admin 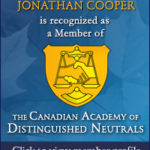 Cooper Mediation is pleased to announce that mediator Jonathan Cooper has been inducted to the Ontario Chapter of the Canadian Academy of Distinguished Neutrals (CADN).

Jon was welcomed to the CADN following a peer-vote review and completion of due diligence client interviews. CADN is an organization consisting of the most successful commercial mediators in the world. Membership is by invitation only and is a recognition by a candidate’s peers that he or she has attained status as a preeminent commercial mediator and professional in the field of alternative dispute resolution.

Jonathan T. Cooper is the taller, younger and non-bow-tied mediator with Cooper Mediation Inc. He mediates primarily, but not exclusively, in the area of personal injury and insurance. Jon was recently inducted to the Canadian Academy of Distinguished Neutrals (CADN) and was inducted to the International Academy of Mediators (IAM) as a Distinguished Fellow in 2019. Both the CADN and the IAM are invitation-only organizations consisting of the most successful commercial mediators in the world who must adhere to the highest practice and ethical qualifications. Jon can be reached at jon@coopermediation.ca or at (647) 993-2667. To schedule a mediation with Jon, visit: https://coopermediation.ca/jonathans-online-calendar/.

CMI is a highly respected and sought-after Toronto-based firm offering mediation and arbitration services to Ontario clients. CMI was founded by Vance Cooper after he transitioned out of his legal practice, which began in 1985, to focus on mediation. Building a strong reputation for his tact and ability to handle complex matters, he became an in-demand mediator. Serving as a trusted mentor to Jonathan Cooper and Logan Cooper, who joined CMI in 2014 and 2017, respectively, CMI has grown to have a mediator for all types of matters and for every budget. For more information visit: https://coopermediation.ca/.

ABOUT THE CANADIAN ACADEMY OF DISTINGUISHED NEUTRALS

The Canadian Academy of Distinguished Neutrals is an invitation-only professional association whose membership consists of mediators and arbitrators distinguished by their hands-on experience in the field of civil & commercial dispute resolution. Affiliated with the US-based National Academy of Distinguished Neutrals, they are proud to assist thousands of North American law firms each month. For more information visit: https://www.youtube.com/watch?v=CS9beHjCtA0&feature=emb_title.